Having received my new work roster for the rest of the year I have now been able to look through and pencil in possible races for the year. After finishing Paris I had no particular races in mind and ran Birchanger 10k a couple of weeks back. Knowing I had Sunday 17th May free I had a look at what races were available. There was Great Baddow 10 mile, Wimpole 10k, Richmond Marathon and the Flitch Way Marathon. I opted for the Flitch Way Marathon. The Flitch Way Marathon is one of Challenge Running’s many races, this is now the fourth of Lindley’s races I have taken part in. 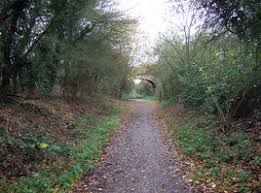 The Flitch Way is now a footpath that follows the route of an old railway line that used to run from the town of Bishops Stortford to Braintree but was removed in 1969 under the Beeching cuts. It is predominantly flat if a little soft under foot in places, to the extent that one section runs on a wooden walk way through the worst of the boggy patches. The Flitch way Marathon route starts in Great Notley Country Park, heads out along the Flitch Way towards Takeley for 13 miles and then back to finish at the top of a steep hill in the park as seen below.

As I hadn’t trained I planned on taking the run easy and treating it as a training run. The weather was as perfect as it could have been for running and with the Flitch Way bordered by hedge row and trees it was very shady and cool to run along. I was dropped off at the start around 9am and saw Lindley the race director who pointed me up to the race HQ. After collecting my number and storing my bag I chatted to some of the other runners, some of whom I had met before, others I hadn’t. I had initially told my running friend Gin Craig I was going to run with her as I reckoned I was only going to run between 4 hours 30 minutes and 5 hours. After we set off that barely lasted 1/2 a mile, the pace was 9m 25s per mile and I felt comfortable enough to run a bit stronger than that.

After winding our way out of the park and heading onto the track itself we crossed a road. A short distance on runners were greeted by a cafe set at one of the old stations, Rayne,  complete with an old railway carriage.

The route then continued along a firm packed track. Being a clear warm day the track was quite busy with family walkers and cyclists. The route headed toward the town of Great Dunmow. I had quickened my pace a touch too much and was at 8 minutes 15 seconds per mile and slowed a little to someone who was close by and holding a comfortable pace. It turned out to be Jaime Neill who is an online acquaintance from the Facebook page Run 1000. He was holding a very steady 8 minutes 30 seconds per mile so I decided to run and chat with him. What had started as a day off and taking part for the fun of it was now turning in to a run that was currently better than PB pace! I was mindful to make good use of all the aid stations along the way, the first of which was manned by Rich Cranswick whom I’d met at the SVP last year. At Dunmow the route deviates very briefly through part of the town then linking back up with the Flitch Way route. The ground in parts along here was very soft and quite wet but I managed fine with my road shoes and stayed up right! I always use Nike+ app on my phone when running as it gives an audible pace every 0.5 mile which I like and lets me know if I’m working too hard or even not hard enough. The pacing was still very steady at 8m 30s a mile. Heading ever closer to the turn around point I was hoping I wouldn’t hit any type of problems until well after the 20 mile mark. wanting to get a good amount of drink onboard at the half way point I told Jaime I was going to push ahead to give myself a couple of minutes to stop. The legs were still felling strong despite not having a long run further than 13.5 miles since Paris Marathon.

After the half way point there started to be more a bit more of a difference in pacing, sometimes catching people, sometimes being over taken. As I headed back towards the town of Dunmow I had to take a left hand turn through a hedge and into the industrial estate. I missed the turning and went straight on.  A runner behind me followed, we both hadn’t gone far and I started to question it, it didn’t look right. I stopped, he carried on. I back tracked and bumped into another runner also heading along the same path. I told him I thought it was wrong and after going back a few hundred yards saw the gap we should of turned through. I’ve no idea where the other runner went or if he’s even finished yet! My legs had started to feel things now and were getting tired. The new runner I was now with was David Rogers. He had initially been ahead of me before slowing enough that I could catch and over take him before meeting up again when I made the mistake. Both tiring we decide to stick together and pace each other back to the finish. My pace was now fading away quite badly and the chance of a PB had gone but I was still on for a strong run. The finish of the marathon is at the top of a steep hill which has a large sculpture on it, upon touching the sculpture you have finished the race.

Having been running together for 3 or 4 miles I suggested to David that we should race the hill up to the finish together. I’m not sure if he thought it was a good idea but he agreed anyway. We returned back passed the cafe at Rayne station, back on to the track and just had to get back down into the park. we could see the hill ahead with the bird sculpture on top, the bottom of the hill approached, a quick shake of the hands and a wish of good luck and I was gone!! I put my foot down and powered up the hill not looking back to see if David was hot on my heels. A sprint of the last 30 yards and I had finished another race. If counting ultras this was now my 7th race of marathon distance or greater. The organisation and marshalling is second to none at challenge running events and can’t recommend them highly enough. Get over to their website, have a look and sign up to one of their future races.

Initially I wasn’t really sure what my time was but found out via Lindley that it was 4h 14m 19s. 12 minutes faster than Paris marathon and only 14 minutes 26 seconds away from my PB so quite a good day. Now to just keep the miles up and stay injury free!