Knowing I am heading towards the London marathon in April I have been putting in some good road miles and making good progress. Every winter season our running club has a small cross country league including 3 other local clubs, Ware, Harlow, Bishops Stortford and ourselves Saffron Walden. I ran in 3 of the 4 race last season and found it some of the hardest running I had ever done due to the wet and muddy conditions that usually ensue. 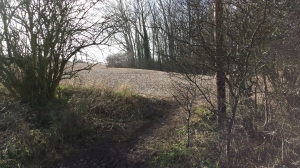 Today (02/02/2014) I turned out for our home cross country event that takes place in my home village of Newport, Essex. Knowing the course and conditions I was expecting a very wet and muddy run as the rain has only just decided to back off this weekend after weeks of rainfall. Above is a picture showing the end of the initial loop shown on the map at the bottom of this blog post. The route comes from behind the trees in the distance tracking around the edge of the field and exiting at the foreground. The initial start point heads off up a very rutted and potholed country lane that was very wet with all the holes and ruts full of water. Apart from getting off to a very wet start, being crowded I took it easy so as to not get a twisted ankle up he lane. the route then winds around to the left tracking in a loop round the field as described above. 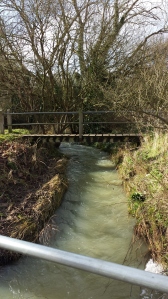 After exiting the field there is a stream crossing that usually is ankle deep but with the bad weather it was running at about 3 feet deep. Although this level has dropped from about 6 feet it was deemed unsafe to cross and the small footbridge was used instead. The route then heads back up the country lane from where we started before diverging off. At this point I was feeling quite good and pacing at 7.30 minutes per mile, which for me was good as this is more of a road pace time. As the route continued it climbed a very gradual hill that became wetter and muddier and began to take its usual killer cross country toll. I backed off a little trying to maintain a good running rhythm rather than give in to the running demons telling me to walk. The course then levels and begins to drop so the pace can be picked up again, the only problem is it gets even wetter and muddier! The section around 3.5 miles was extremely sloppy but my Salomon trail shoes were holding up well. The route then has a section that returns to a country lane which gives a respite from the mud and again helps to pick up he pace again. Knowing the route the hardest short, sharp and steep section was just ahead. Leading off the country lane is a set of steps heading back up to the fields. After stepping up there is a 150 yard steep hill that has the legs burning, on reaching the top it turns left and a short way along turns right on to the final field crossing. Fortunately the field was quite firm under foot but with the steep hill taking some wind out of my sails I was blowing quite hard across the half mile heading back to the secondary school sports field finishing area. as we passed through the hedge row on to the school field I could still see the Harlow team runner ahead of me. I pressed quite hard to try and catch him and closed the 100 yards to an arms length by the finish funnel but it wasn’t enough. Another hard cross country done finishing 43rd in a time of 32 minutes 16 seconds averaging 7 minutes 28 seconds per mile which is usually a road pace for me so I was really pleased with my effort. After checking last years results I ran 5 minutes and 25 seconds faster than last year. So it is showing all the hard work and gym speed sessions is gradually showing through. Now, after a rest it’ll be time to get back on the road and build toward April’s London marathon.