Over Christmas I had given myself a couple of weeks off running. In part as a much needed rest for myself but also to give my long suffering wife and children some personal time over the festive period. I had signed up to the Flitch Way 100k  on 29th January 2017 and had to get back into the training post Christmas..and it wasn’t going well. Up until Christmas I had been following a high carb, low fat diet and had been in keto and running well. Christmas and all the lovely food that it brings had put an end to that and post Christmas I was struggling to get back into a routine and finding training very difficult. My longest run pre race ended up being 13 miles and this showed on race day. I managed to haul myself to 44 miles before my knees protested from the lack of training. Not too bad considering but still noted as a DNF. But it was a good kick to the training and helped get me going again.

Next up was the St Peter’s Way ultra, again one of Challenge Running’s races on February 26th 2017. The runs in the weeks leading up to it had been stronger and I was feeling much better and more confident. On race day I drove down to Ongar giving a lift to local runner Robin Challacombe and parked near the start which I know fairly well as it is also the same area that incorporates the Essex Way Relay which I have taken part in the past 2 years. The weather was a little on the cool side and damp. The race is listed as one of the muddiest race in the UK! so was expecting it to be quite bad on the field crossings involved. I had my kit check done and registered then sought out some friends and had a chat and catch up. Lindley then gave a briefing and soon after set us all on our way. I’m not great on races that rely on notes and navigation and was expecting to get lost at some point! As well as the maps and notes I had the route on my Garmin and in the early stages planned on following the masses hoping that, surely, the majority couldn’t all go wrong. 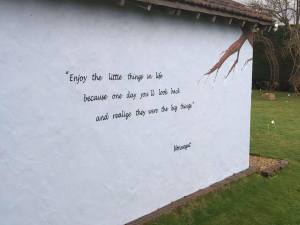 The early miles were pretty good and straight forward with people moving in large groups with only a slight bit of weaving over fields and finding the way. As usual I was sweating fairly heavily but wasn’t too concerned, I was moving at a good pace early on around 8.45 per mile. I had set myself a time of 9 hours after the 100k effort and subsequent training, not knowing the route and also aware there were field crossings and hills involved. CP 1 same came around were I didn’t stop for long at all just topping up my water and continued on wards. I soon came across Nathan Taylor who I had met at the 100k and we ran together for some way. I know Nathan is a stronger runner than me so wasn’t sure how long I would try and keep to his pace. He has run St Peter’s a number of times so it was great just to follow him and not refer to the map or notes. We passed the A12 and then onwards passing a railway line. It was only a few days after storm Doris and along this section there were a number of huge trees down which meant a small bit of climbing over or ducking under. Shortly after I fell behind Nathan and made my biggest mistake of the run missing a turning he had taken which left me back tracking and trying to find the correct turn. A fair few people had managed to pass me at that point and I ran with or near to another set of runners passing alongside a golf course and narrowly being missed by a wayward shot through Stock and on towards Hanningfield. 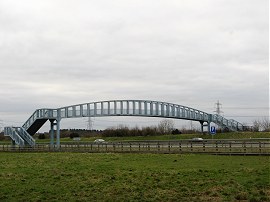 The route then leads on to the A130 and following this is a long incline which I had to take a walk on as it seemed to drag on for ages and got to my legs. Fortunately once it was over I was able to pick up the running again, I’m not sure in hindsight what my pace was at that point but I know it was good and better than I had been hoping for. It was now a matter of how long it would last! There were some reasonably rough field crossings but the weather had been kind to us and I managed to run across them. They certainly would have been far worse in a downpour. I had developed a bad backache mainly due to not running regularly with the waist belt I was using. Heading on to Maylandsea and beyond was a good section and the legs were working well and I was still! yes! still! holding a good pace. As I headed on to the final checkpoint the wind was really picking up, no rain fortunately but it was really strong. As the final checkpoint came into view I was feeling really confident and just wanted to forge on to the sea wall where I knew the end was near. On leaving CP4 I pushed on fairly strong and was determined not to let the few fellas behind me catch up and overtake. I kept looking back but had lost sight of them. I think it was just before Tillingham I noticed that someone different had also overtaken them but was making good ground on me!! I pushed on “when is that bloody sea wall going to appear!” I kept looking back and I could still see a fluorescent yellow t-shirt some way back, maybe half a mile. After passing though a small farm and over a couple more fields the bank of the sea wall was in sight. on top and looking out the chapel of St Peter was in view. The wind was howling and the strongest it had been now open to the sea. I got a bit carried away and belted along the wall. As the crow flies the chapel looks quite close, about 2.5 miles but the wall loops around and is closer 3 possibly 3.5 miles. I slowed a little and kept a strong pace…it just didn’t seem to get closer. Then it was standing before me..passing through a small copse and on through the finish line. 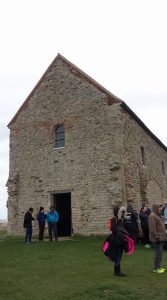 I finished in 7h 42m well inside my target of 9 hours. An average pace of 10.45 a mile which was 15 seconds per mile faster than my effort at the 100k so a good improvement. All of my races in the coming months are all training for the Grand Union Canal Race  which I failed to complete last year missing the cut off at CP9, 133 miles.

Thanks to Lindley and all of the volunteers who made it a great day, a great scenic and historic route. It’ll certainly be on my list for next year.