Since the Saffron Trail in July running has been a struggle both physically and mentally. I came out of the Saffron Trail with an ankle injury which still hasn’t completely gone even now. After the Saffron Trail I had 10 days or so out to rest then tried to get back running but was held back on any double digit sessions because of the ankle. I then had the Essex Way Relay with the club to aim for. Being despondent with my efforts I didn’t even write a blog post about that run. I did a 10.5 mile section which was about 1 hour 40 minutes effort, 25 minutes off good form. It was a great race and enjoyable and hope the club can get a team together for next year. It was just hard running on an injured ankle. So, my next booked race was the Stort 30. Last year I ran in new footwear, got cramp and suffered in the return 15 miles finishing in 6 hours 5 seconds. This years attempt was to better that time and avoid the cramp. Having switched my footwear to the Brooks ASR 10 shoe, I have had no problems and think they are a great trail shoe.

My long term problem has been getting proper long runs in, the 15 or 20 mile runs. My longest heading towards the Stort 30 was 14 most others being 6 or 8. I have had a couple of sports massages in the past 3 months which doesn’t seem to have done much to help the ankle heal. All I could do was take the run step by step. The day couldn’t have been any better and was a huge improvement on last years gale force conditions. It was mild and dry so I ran in shorts and t-shirt, none of the leggings and rain jacket of last year. I also ditched the race vest and went with a light weight Nike waist belt that has 2 small 300ml bottles and a pouch that I filled with Jelly Babies. Having done some other ultras there were a few people that I have met before there. Nicki Edwards, Colin Harper and his partner Sharon, Paola Peroni, Gin Craig and her friend Lisa.

We have had some rain lately so I was expecting the first 5 miles to be very muddy but it ended up being pretty good. I settled into a comfortable pace making sure I didn’t use too much effort, didn’t chase anyone and let those that passed me go. At the first 5 mile checkpoint I carried straight on to save some time and purely to make use of what I was carrying. 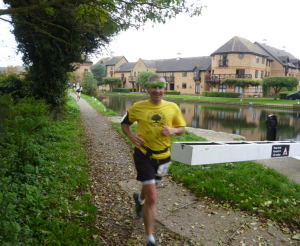 After the 5 mile Sawbridgeworth checkpoint the path returns to a gravel or stony surface. The route as well as following the river towpath is also mirrored by the Cambridge to London rail route. The stations run from Bishops Stortford as Sawbridgeworth, Harlow Mill, Harlow Town and Roydon which along with the checkpoints helps to break down the whole route into smaller 2 to 3 mile sections. Harlow Mill soon came around only another 2 miles and I’d be at CP2. Everything was holding together and I was keeping a good pace around 7mph, 8 minutes 30 seconds per mile. As the narrow boats came and went passing longhorn highland cattle and even some pigs on a far bank Harlow Town checkpoint came into sight. A very quick stop for a drink and some banana and I headed on to Roydon station. No aches, no pains just steadily purring along. Too good to be true. 20 minutes later I arrived at Roydon only a couple more miles and I’d be at the half way turn around point. At Roydon there is a tarmac section, you then pass Roydon marina before crossing a weir and turning right onto the river Lee. Another half mile and I arrived at mile 15 checkpoint 3 in 2 hours 11 minutes! The lead runners had passed me at about 14 1/2 miles and were sailing along. I hoped the return 15 would be just as good.

Mile 17 and I started to cramp. I just need to be straight up honest with myself, I was majorly under trained. The pace eased up and I had to adjust to make sure full on cramp didn’t lock my legs up. Mile 19 my ankle was killing me again, I was feeling sick as hell and my energy had vanished. I had bought some Ibruprofen with me for the ankle…and left them in my kit bag! Somewhere around mile 20 I had to stop, my mental strength was eluding me as well, I was trying to dig in but I couldn’t get my head straight. Then Colin whom I met at the Saffron Trail came along, I tagged with him and Sharon a short way and had to let them go as I could feel my legs seizing again. I had to break the small 3 mile sections into further small chunks of 1/2 mile blocks of running with a short break to let the legs relax. As I started to feel better and the pain eased off I could hold some kind of pace better and surprisingly mile 24 was my fastest at 7.27 for the mile. I couldn’t keep it up and the pace soon died again. Back at the Sawbridgeworth checkpoint again I was only 5 miles from the finish. There was no doubt I was going to better last years time it was just a case of by how much. Each 1/2 mile block came and went and approaching the last mile I walked a little as the last section is up hill to the finish area on the field were we had started. I was determined to run the hill and finish running. I plodded away up the hill with my thighs stabbing with each foot drop. Onto the field for 1 lap to the finish, my legs started to lock and other runners were hot on my heals. No way was I stopping now with 200 yards to go and I wasn’t going to be passed either.

I timed it at 5 hours 30 minutes 38 seconds..30 minutes quicker than last year so a good result.

The simple lesson from this year is not to underestimate even short flat ultras with perfect weather. The ankle injury couldn’t be helped but if you don’t respect the training ultras will hurt you.I’ll be back for more next year.