I had taken part in GUCR in 2016. My first attempt and a large jump in miles, my previous longest distance having been 70 miles at the Saffron Trail ultra. Having no idea how to tackle the distance I took it as it came. The sleep deprivation aspect did me in, I gave in far too often stopping and sometimes napping continually losing valuable time. I made it to CP 9, 133 miles at 23.59 and was timed out.

With this new experience and knowledge under my belt I returned in 2017 with Mike Abel crewing for me. I then went and sprained my ankle around mile 60 approaching Blisworth tunnel. I was met by Mike, had the ankle strapped and took the personal decision to do the unadvised no-no of taking pain killers. I got moving again and slogged out the final 83 miles to finish in 41h 44m

Fast forward 2 years, more marathons and ultras under my belt, new friends made and the love of no nonsense, low key, razzmatazz free events I again had my sights on GUCR. Could I put my experience and knowledge to use and improve the finish time. I attended the draw in Buckingham along with friends and club mates Mark and Nikki Coutts, all 3 of us fortunate to make it into the race. 2018 had been a bad running year with constant injury or illness. I was starting to contemplate giving up ultras with their harsh, destructive nature and not sure if I had any more ability to give to improve PB times. A rest through December and I felt good again, better than I had for the previous 12 months. I put in an entry for Country to Capital, a race that I hadn’t done before and would take me onto the final stretch of the Grand Union. The event was great, catching up with friends, blessed with good weather I finished in 7h 43m, only 10 minutes slower than my PB for the distance.

Maybe some form was returning! I then entered Challenge Running’s St Peters Way and finished in a PB time of 7h 10m. The next challenge in the build up to GUCR I set myself was to try and improve my marathon PB. I had been stuck at 3h 34 for nearly 3 years and couldn’t seem to get the training right. I entered Boston, Lincolnshire marathon and increased my weekly training miles which did the trick finishing in a time of 3h 25m. It was a good morale boost and gave me some faith that when training and resting properly I could still push my personal boundaries. I was unable to to find a 100k or 100 mile to do so put in another training effort jogging from home one morning, leaving at 1am, 40 miles down the river Stort and river Lea to get to Hackney Marshes parkrun. It went very well. I felt ready.

I decided to go with crew again, mainly to help with the sleep deprivation struggle I have. Just having someone to nag, constantly cajole and having hired a tracker knowing I was being watched from afar, waiting for the phone to ring to get a bollocking that I was inactive was an incentive to keep moving. I put a message out on social media and had a quick and definite acceptance from 2 friends, Rachel Vernon and Michele Whiffen. 2 experienced runners but had never crewed before. I was happy and grateful to have them on board but did wonder if they realised what may lay ahead for us! Crewing can be a real test of friendship when everyone is tired and cranky having a row canal side is always a possibility.

I booked into Jurys Inn on Broad Street, 2 minutes from the start. I’ve stayed there before and it’s always been good. Except this time! We went to registration early, met a few people and then went to the regular dinner spot at O’Neils. Meeting more friends, talking races and tactics, a few drinks to settle the nerves we had a short walk canalside (£33 for 2 G&Ts!!) and went back to the hotel.

FFS! Some group were having a running race up and down the corridor. Quiet. Snooze. Woken again by someone locked out of their room banging on their door. Quiet again. Snooze. Woken again! Some group having a party in the corridor. Struggling to get off to sleep I probably had about 4 hours sleep. Up at 4.45am, what a great start being shattered already. Crew into action with a strong coffee, porridge made with a carton of oat cream got some early calories in. Once ready and walking down I didn’t feel bad, apprehensive and ready to get going. A few more hellos to friends and some pictures we were then ushered to the Gas Street basin start. Some words from Dick Kearn and we were away on the 25th anniversary of the GUCR.

I set off well as usual a touch quicker than I should but knowing and planning I would settle and be more sensible from CP1 onwards. I’d only gone a few miles and I had a bad stomach ache and hoped it would pass. it didn’t. Paul Adams passed me just at a point of panicked desperation trying to find a discreet spot I could sort things out before having an embarrassing canal side explosion and I became an historical story of…’Do you remember the 25th anniversary run where that bloke shat himself!!’. Hedge found. Job Done. Carry on. Feeling comfortable again I got back into a steady rhythm  to CP1. Met the crew and off again. The stomach ache was back. Then the vomiting began. I was having a disaster. Early doors, loads of time and a long way to go I carried on. Into CP2, Hatton Locks I was off the schedule I had set. Another top up and away. More vomiting. I was being mindful to stay hydrated  and have some snacks but the energy was feeling sapped.

The scenario continued through CP3 and finally settled beyond Braunston. The weather was very humid and I was getting word that plenty of people were being affected. Although my schedule had slipped the average pace was still well inside that needed to finish in the 37 to 38 hour area. I just needed a good patch of steady running and all would be well. Heading on towards Heart of England and Navigation Inn the pace was very erratic. I planned on having a time out at Navigation Inn to get night gear on and to have food and drink. I was being joined by my first buddy runner there, Jim Patman. I was hurting quite a lot by this point and had hoped to get far closer to 100 before struggling and suffering the final 45 but with such a bad start to the day it had taken it’s toll on my body. Having Jim join me was a good distraction from it even if the pace didn’t improve a great deal. I met the crew again at mile 80 and then at CP6, Water Eaton where Glyn Raymen and Paul Mason among others were on hand to help. Ian Shelley arrived around the same time. Jim had left by this time and Michele had taken on the unplanned buddy duty as I was still having a hard time. She was great getting me to do short bursts between boats and bridges. I was really having a strop and occasionally dropping to the ground for some brief respite. I think the frustration must of got to Michele too as well as constant shouts of ‘eyes open!!’ she even threw in a kick to wake me up. it worked. I can’t remember how long it went on before she broke me and I refused to jog on her commands. Finally arriving at CP7 that seemed to take forever I saw Phil Bradburn brief enough for a handshake before being snatched away by the crew to get bottles changed and to eat. While they got on with stuff I fell into the boot of the car and had a snooze. And opened my eyes to Spencer Milberry and friends who had dropped by from a run. More complaining from me and they all agreed there was nothing wrong with me and to get on with it. It would definitely have been from beyond 100 where I started to complain I was done for and couldn’t continue. They wouldn’t let me quit. Rach now decided to keep me company for a stretch again to keep me moving and jogging..she was more of a task master than Michele! Not a gentle jog..’Right! sprint to the next boat’ shuffle..shuffle Along this stretch Rach had to go on an unexpected rescue mission. Passing a lock I heard shouting and splashing and looking back I could see a couple had let their narrow boat slip loose and he’d tried to jump on before it was out of reach and fell in. His wife was trying to retrieve him on the far bank and Rachel said she’d stay and help them and got me to jog on. Once she caught up she explained she had to have a running jump, superman onto the edge of the barge, pull herself on…and then realised she didn’t know what to do. With some guidance from the stranded couple she got it back to bank side for them. Seriously putting her obstacle racing skills to the test! later on Adrian Eeles joined for some buddy running and out of nowhere I managed to put in 5 miles of good running getting in a couple of 9 minute miles completely leaving poor Michele behind on her own. Over that stint averaging 10 1/2 minute miles which was far better. Arriving at Springwell feeling good, rest, top up and ready to go I knew my final buddy runner was somewhere ahead waiting and was to join me to the end. From a while I felt quite good, finally met Lewis Clarke and jogged on having some good occasional spurts, again clocking a couple of 9 minute miles before crashing again. 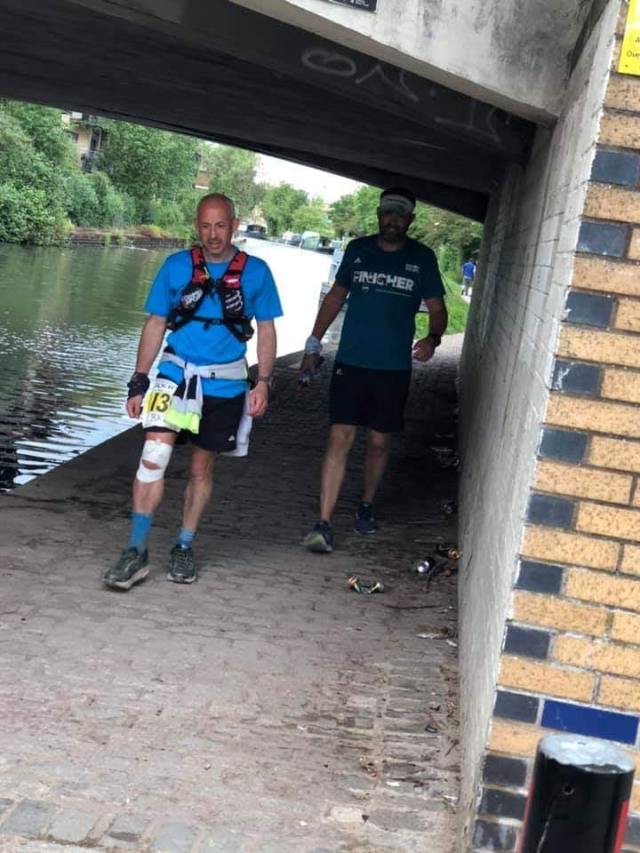 Around Yiewsley we met Lew’s wife and Bec’s Hurst, had a really good foot clean up and patched blisters and set off again. A brief stop for a picture at Bulls Bridge and then into CP9, 133 miles.

Beyond this point things slowly but surely went down hill and the last 10 miles became death march territory. Being so tired I was talking aloud and verbalising how far there was left to go in a bid to stay alert. The final 2 miles a literal broken whimpering mess. No sooner had I crossed the line I had to drop straight into a chair, a firm handshake from Dick and another finishers medal was mine! Way harder than 2017 but due to the beasting the crew gave me a 59 minute improvement to finish in 40h 45 minutes. I can’t thank them enough for their help, anyone would think they’d been crewing for years, utterly invaluable. This is such a great race with the best of people that get involved whether it be running, volunteering, crews and of course the organisers.

Once again Dick, Keith and Wayne 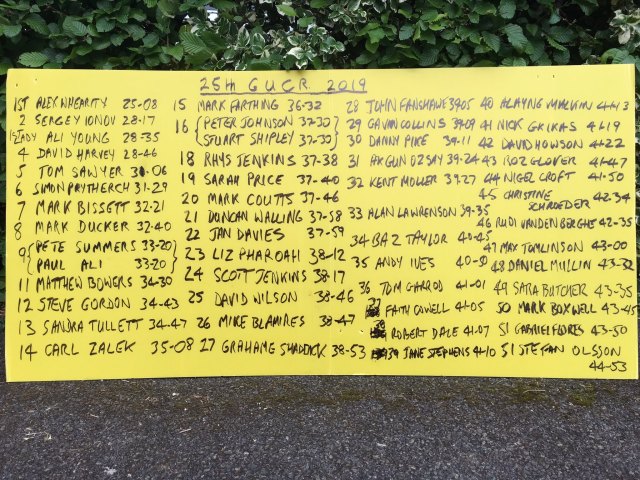