Last year I took myself away to Scotland to run 35 miles of the West Highland Way from Bridge Of Orchy to Fort William. After writing up my blog post on how things went and speaking to friends at the running club my friend and fellow club member Tim Mcmahon said he would be interested in covering the route as well. So the organising of 35 mile re run was put into action.

We set out on the over night sleeper service from London Euston to Scotland and arrived at Bridge of Orchy at 08.15am. The weather was fantastic and a big improvement on last years overcast and rainy day. I had been briefing Tim on the route and what to expect but just as I had found last year the run is a shock to the system from the start having to climb up through a pine forest for the first 1.5 miles before coming up to the Inveroran hotel and a surfaced road to run on. With the weather being warm we were sweating right from the start and tried to keep an even and slow pace. The road way then leads onto the old military road way and on towards the Kingshouse hotel on the A68. 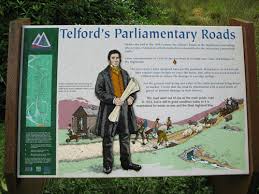 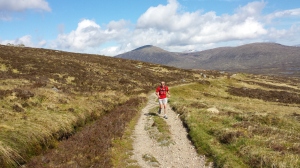 Heading down toward the Kingshouse hotel the wind had picked up quite a lot but was still very warm, we were only about 1.5 miles from the infamous devils staircase!

Given how steep the staircase is we managed to get to the top within about 30 minutes and the legs were feeling pretty good. We started a slow run down and headed on to Kinlochleven. We were now 17 miles in and things were going well, no cramps, energy was good and averaging around 11 minute miles. Given the steep terrain and the climb having us down to around 2 miles an hour I was more than happy with that. The path down was really hard on the ankles and very steep in spots so it took a lot of strength from the legs to avoid falling over. I found a pigeon step run heel striking was an effective way of being able to run downhill but retaining control at the same time. The scenery was breath taking and the miles were ticking by and we soon came down to Kinlochleven. The time was 12.40pm which had us around 20 minutes ahead of last years time. Again as per last year we went into the village shop and topped up on water before continuing on. There is a short steep climb out of Kinlochleven back up to a military road so again we walked this as it was too steep to possibly run.

Once up on to the road it levels out so is far easier to get running on. Now 22 miles in I was tiring quite badly and made sure to keep eating and drinking to keep the energy up. After traversing along the mountainside for around another 6/7 miles we came upon a point of the trail where there is a couple of different route possibilities. Last year I had gone left and followed a tarmacked road back into Fort William, this year we decided to go right and follow the off road trail instead. In hindsight this may have been a mistake as it was extremely tough, very steep in places and very energy sapping. I was beginning to suffer quite badly feeing sick and dizzy, trying to keep on top of things I soon used up my remaining water. If you attempt this do not underestimate how much water you need. Over the entire distance I had only carried and consumed 2 litres of water, I could easily have drunk 4 litres!! The route climbs up and enters a very dense pine forest which was amazing and straight out of a Hollywood movie, very dramatic and heavily scented with the Scots pine. I kept moving through phases of sickness followed by feeling ok and energetic enough again to run more, quickly followed by more nausea. Now around 33 miles in we used the gravity of the downhill parts to help get back into a slow running rhythm. We only a matter of a couple of miles from reaching our designated 35 mile target, the same distance I had run last year, I could quite easily have laid down, not moved and just stayed there out in the open. It was a real help having Tim along this year as He was able to keep encouraging me. We soon came across the long awaited signpost pointing to the campsite that marked our 35 miles. The weather was turning, rain had been forecast but for later in the evening, it had arrived early. It was really starting to blow a gale and the clouds were closing in, we twisted around the final descent and could see the campsite through the trees. Out into the open and we reached our 35 mile target in 8 hours and 20 minutes, this was 41 minutes quicker over the distance than last year but the alternative route we took at the end was far, far harder. We dropped into the campsite shop and refuelled and after 10 minutes I started to feel a little better. Tim had faired really well but admitted he had found sections very tough and was shattered. Another great running experience, but for now I think I’ll return to some shorter distances no doubt before misplacing my marbles again and tackling another ludicrous distance.